An Alabama A&M professor is part of a team that’s using computer algorithms to wring efficiency from solar powered plants. 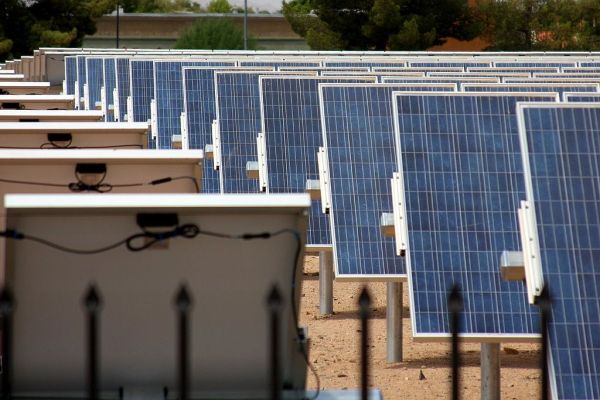 You might call Aaron Adams a jack of all engineering trades. He’s developed new materials for nuclear radiation detectors at Brookhaven National Laboratory. He’s helped bring clean water and lighting to rural villages in Peru. He’s worked as a design engineer at Ford Motor Company. Now the Alabama A&M professor is teaming with researchers at Purdue University to tackle one of the defining problems of our time: Energy conservation.

About a quarter of the US’s energy consumption is by the industrial sector. Those companies pay dearly when the cost of electricity rises, or when utility companies up their rates during peak usage hours. To offset those costs, it often makes sense for a plant to incorporate a microgrid—a miniature network of solar panels, wind turbines, and other renewable energy sources. The plant may be powered either entirely by the microgrid or, more likely, by some combination of the microgrid and the centralized power grid. Microgrids can not only save a company money—every kilowatt harvested by the microgrid is one that doesn’t have to be bought from a utility company—they can also reduce carbon emissions.

But microgrids can be fickle. On an overcast or calm day, they don’t deliver as much energy as they would on a sunny or windy day. At the same time, a plant will often have some flexibility in its manufacturing schedule: Although some process are critical and must run constantly, others can be safely curtailed and still others can be rescheduled. The trick, then, is to be able to dial back and dial up a plant’s operations in response to a microgrid’s inevitable fluctuations.

In 2011 Ke Zhou of China’s Jining University developed a computational algorithm that does just that. The algorithm compares real-time measurements of the microgrid’s output and the plant’s manufacturing demand with historical averages and then adjusts the plant’s operations and its power usage from the centralized grid accordingly.

To see how well that algorithm would work in practice, Adams and his coworkers built a miniature plant—essentially, a water heating and cooling system—at Purdue’s Applied Energy Laboratory. Modest in size, the plant consists of a few pumps, an electric heating unit, and an air-cooled chiller. At full capacity, it consumed about 15 kilowatts of energy, about the same as 250 light bulbs burning at once. An array of solar panels on the lab’s roof supplied up to 3 kilowatts of the plant’s energy demand. The rest came from the centralized grid.

Zhou’s algorithm performed admirably as a shift manager. On sunny days, it trimmed the plant’s total energy consumption by 12% percent. On cloudy days, it reduced total energy consumption by more than 30%. To put that in perspective, if every industrial company reduced its energy usage by 10%, the US alone would release 200 million fewer tons of greenhouse emissions.

Of course, there’s only so much an algorithm alone can do. Good science needs to be supported with good policy. But on that, too, Adams may have us covered: As of this winter, he’s in Washington DC as a fellow in the National Academy of Science’s Christine Mirzayan Sciene & Technology Policy program.