Hampton University’s role in the “God particle’s” discovery has been largely overlooked.

Much has been written about the Large Hadron Collider, the 27-km-circumference particle accelerator, which started back up on Sunday after two years being shut down for repairs and upgrades. Less is known—at least by the public—about the multinational research collaborations behind the design, operation, data gathering, and data analysis conducted at the LHC’s various detectors. One of those detectors includes a bundle of 300 000 plastic tubes, or straws, whose design was tested and modeled at HBCU Hampton University.

Experiments at the LHC are designed to exploit the unique capabilities of its various detectors. ATLAS, one of the detectors that discovered the Higgs particle, is a multipurpose detector located 100 meters underground that was designed to detect muons and other remnants of high-energy proton collisions. Collisions at even higher energies and intensities are expected to: confirm—or disprove—such theories as supersymmetry, find dark matter, and unveil more details about the Higgs.

Critical to ATLAS is the Transition Radiation Tracker, located near the center of the detector (see image below). It is responsible for registering the tracks of particles released or produced during an LHC experiment, for identifying and counting electrons, and for distinguishing electrons from charged pions. As Ahmet Bingül describes it in this 2012 conference proceeding, the TRT is a bundle of roughly 300 000 4-mm-diameter plastic tubes filled with xenon, carbon dioxide, and oxygen gases, wound from a multilayer film reinforced with carbon fibers, and containing a gold-plated tungsten wire in the center. Electrons that traverse the TRT bundle emit x-ray photons, which are absorbed by the xenon gas, whose subsequent ionization is what’s detected. 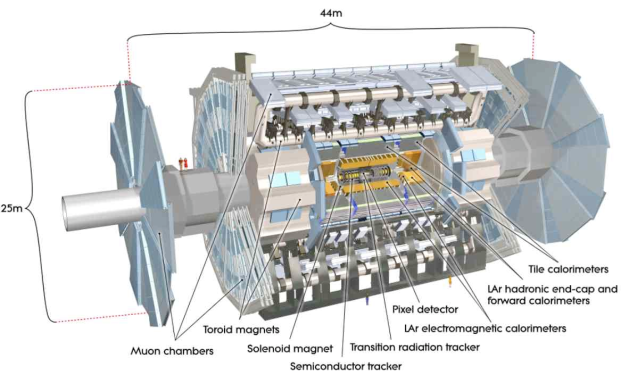 Well before the LHC first turned on in 2008, a TRT test module was produced and examined by Hampton scientists and students, who also worked on the actual systems that were installed in the ATLAS detector. Hampton’s ATLAS R&D was spearheaded by late physics professor Kenneth McFarlane, who also directed the Center for the Study of the Origin and Structure of Matter (COSM), an NSF Physics Frontier Center consisting of three partnering HBCUs: Hampton, Norfolk State University, and North Carolina A&T State University. Former Hampton physics professor Keith Baker, now at Yale University, also served as a principal investigator on the TRT project.

But will the Hampton team be remembered for its contribution to making, as Bingül calls it, a “perfect” detector? “We should make the world aware that an HBCU was a major player in the design and build of the LHC,” says PhD theoretical nuclear physicist Trina Coleman, who now serves as Hampton’s assistant provost for technology. While in graduate school, and simultaneously teaching high school physics, Coleman says she participated in Hampton’s QuarkNet Associate Teachers Institute, which brought together students, high school teachers, and professional researchers to participate in high-energy physics experiments. Coleman says she took attenuation measurements on the TRT’s straw tubes.

Given how often the relevancy and rigor of HBCU academics are scrutinized, she adds, “the fact that Hampton was a part of one of the greatest scientific discoveries is worthy of recognition.”